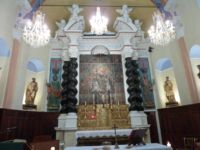 Ordinary name : Eglise Notre Dame du Rosaire ( Our Lady of the Rosary)
Where to find it :at the centre of the village

Built in 1687, modified at the end of the 18th century, restored in 1999.
Originally built as the Chapel of the Rosary in 1687, it became the parish church in 1794 after a fire destroyed the then parish church of Saint John the Baptist, which was close to the cemetery below the village on the Condamine. Thus the Chapel was given the name of the destroyed building. The clock tower is a fine example of what the Romanesque-Lombardian style became at the end of the 17th century, the façade was considerably remodelled in the early 1950s and general restoration was conducted from 1989 and ended in July 1999 when the Bishop came for the inauguration. 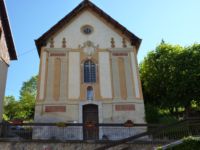 The Chapel of the White Penitents

CBuilt in 1630 on the site of a previous chapel, it was the siege of the Brotherhood of the Gonfalon and Mercy, the White Penitents also venerating the Holy Cross. In 1808, the Brotherhood had 149 members(84 brethren and 65 sisters). No longer in use in the early 20th century, the Chapel was abandoned and was used as a storage place for the village and was left to decay slowly. Restoration campaigns were launched and, starting in 1980, it was made water-proof and its roof and façade were restored, decorated in a pseudo-baroque trompe-l’oeil by Guy Ceppa in 1984. 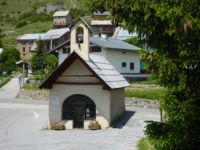 Built : second half of the 17th century
Where to find it : Les Launes
The roof, made with larch boards, is topped by a tapering steeple. Inside a little polychrome sculpted wooden altar piece, blue, gold and white, frames the central niche. Outside, only the façade is primed, whitewashed and decorated with a sundial. Restoration went on during the 1990s. 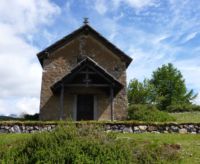 Chapel of Saint John the Baptist

Where to find it : Plateau Saint Jean.
The chapel was rebuilt in the second third of the 19th century. Also called “St John in the Desert”, it is the goal of a pilgrimage at the end of June, during which cattle and sheep used to be blessed. It is situated at the centre of what is surmised to be the original feudal site of Beuil, traces of which are still extant.
It was restored in the 1990s. Masses are celebrated there in Winter with people coming on snowshoes and in June for the parish festival of St John (Midsummer’s Day).

Where to find it : Ciriel area.
The place where it is situated was that of a priory which belonged to St Dalmas de Pedona Abbey in Piedmont, as is confirmed by a list found in the Abbey and dated 1246. The present chapel, dating from 1700, as indicated on its lintel, is built against a hillock on top of which a medieval stronghold might have
stood. Behind the façade, an inscription confirms restoration in 1851, while on the western side wall the year 1927 is indicated as another restoration date. The inhabitants of the hamlet, helped by the people of Beuil, financed the final restoration in 1994 and 1995. A mass is celebrated every year at the end of August.

Where to find it : Saint Pierre area.
Chapel Saint Pierre is situated at the end of a long ridge, near a pass, on a kind of mule track, which once took the traveler from Beuil to the coast above the Gorges du Cians.
A castle was built at the extremity of the ridge in the Middle Ages, traces of which are still extant – among others, part of a wall which was used when the chapel was built, around the 14th century. It is difficult to say whether it was uilt where a previous religious building already stood.
A mass is celebrated every year at the beginning of July.

The former chapel of Saint Bastien, or San Bastian

privatized and transformed in the 19th century. 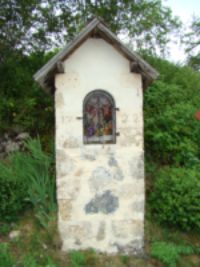